What have you guys been eating lately? I feel like people are going two ways: either eating ALL the comfort foods and making things that they’ve been wanting to make but never had the time to and those people who genuinely don’t want to spend any time in the kitchen and are relying on delivery and takeaway. We’re in both camps – we’ve mostly been cooking at home with a bit of delivery thrown in for fun.

I totally understand the people who just don’t want to be in the kitchen right now. Not everyone wants a sourdough starter pet and not everyone has the time to cook – there are plenty of people who are on the frontline that just don’t have time to. It’s funny, but the word on the internet is that people feel pressure to do something during quarantine, like better themselves or learn a new skill. I think that’s completely bunk. Everyone should just do what feels best for themselves.

This is a dish that will make you feel like your best self. This quick and easy rice bowl is for the peeps who don’t want to spend any time in the kitchen but still want to eat good too. It’s a classic Japanese donburi that’s often made for bentos (hello meal prep) and and ramen shops as a side dish. It’s delicious, easy to batch cook, and full of flavor.

What is soboro
Soboro is ground meat (usually chicken, but any ground meat will do) broken up and cooked with classic Japanese seasonings like soy sauce, mirin, and sake. It’s sweet and savory and typically served on rice in a donburi, or rice bowl. Soboro is a super popular bento lunch choice. It can be both a home style comforting meal as well as the final dish in an expensive omakase soba meal. Soboro is super versatile.

How do you make soboro
Soboro is a simple as sautéing ground meat and seasoning it with the super classic and flavorful combination of soy, mirin (more on that later), sake, and sugar. The key to soboro is breaking up the ground meat into small even crumbles. Most recipes have you fry the meat and break it up in the pan then add the seasoning at the end, but I like to marinate the meat with the seasoning giving it an extra boost of umami. Marinating the meat also makes it easier to break up into pieces – it’s easier to press down on a wetter mix of meat and the liquid slowly cooks out, helping it crumble into pieces as it browns. 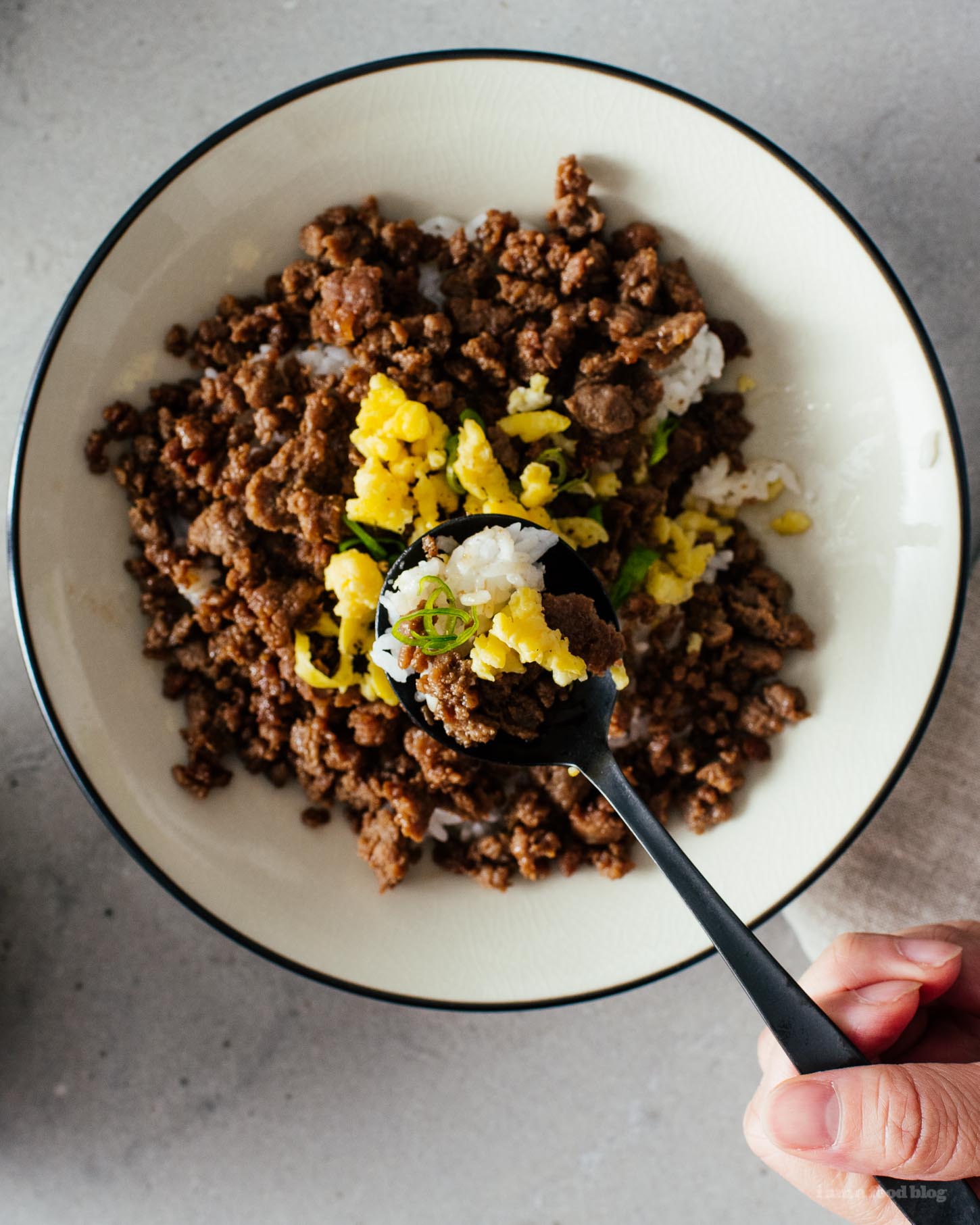 What is Mirin
Mirin is one of the essential cooking ingredients in Japanese cooking. If you like Japanese flavors it’s worth it to invest in a bottle of mirin. It’s a type of rice wine that’s somewhat similar to sake but sweeter and with a very low (basically non-existent) alcohol content. It adds umami, mild acidity, and sweetness to Japanese food, especially the meats, soups, and noodle dishes. You can find it regularly at the Asian grocery store and in the Asian aisle at the grocery store. In a pinch you can use rice with with a bit of sugar added but it’s a super versatile ingredient and you should totally get a bottle, especially if you love teriyaki sauce.

How do you serve soboro
Soboro is served on rice, usually with scrambled eggs that have been scrambled to the same size as the meat. Using chopsticks to stir your eggs while your scrambling them gives you tiny little curds that match perfectly with the sweet-savory meat. Of course you could also go with a soft scramble or any kind of egg you heart desires. Soboro is also often served green beans or peas to round it out and add a vegetable. 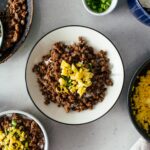 A quick and comforting rice bowl topped off with sweet and savory pork and fluffy eggs.