Dalgona coffee is having a moment. It’s viral on TikTok, trending on Twitter, and blowing up my insta feed. It’s pretty, it tastes good, and it’s probably the best way to to spend some time while you’re at home during the stay home covid campaign.

The best part about it is that you only need three ingredients, two of which you probably already have at home so that means no need to put in a delivery order or go to the grocery store. If you have instant coffee, sugar, and milk, you’re fluffy coffee ready. It’s super simple: mix equal parts coffee, sugar, and hot water, then whip until it turns into a luxe and silky thick creamy foam. Spoon it on to some iced milk (which is literally just milk with ice in it) then enjoy, no Starbucks run needed.

Dalgona coffee, fluffy coffee, frothy coffee, whipped coffee – whatever you want to call it, here are all your questions answered right here! 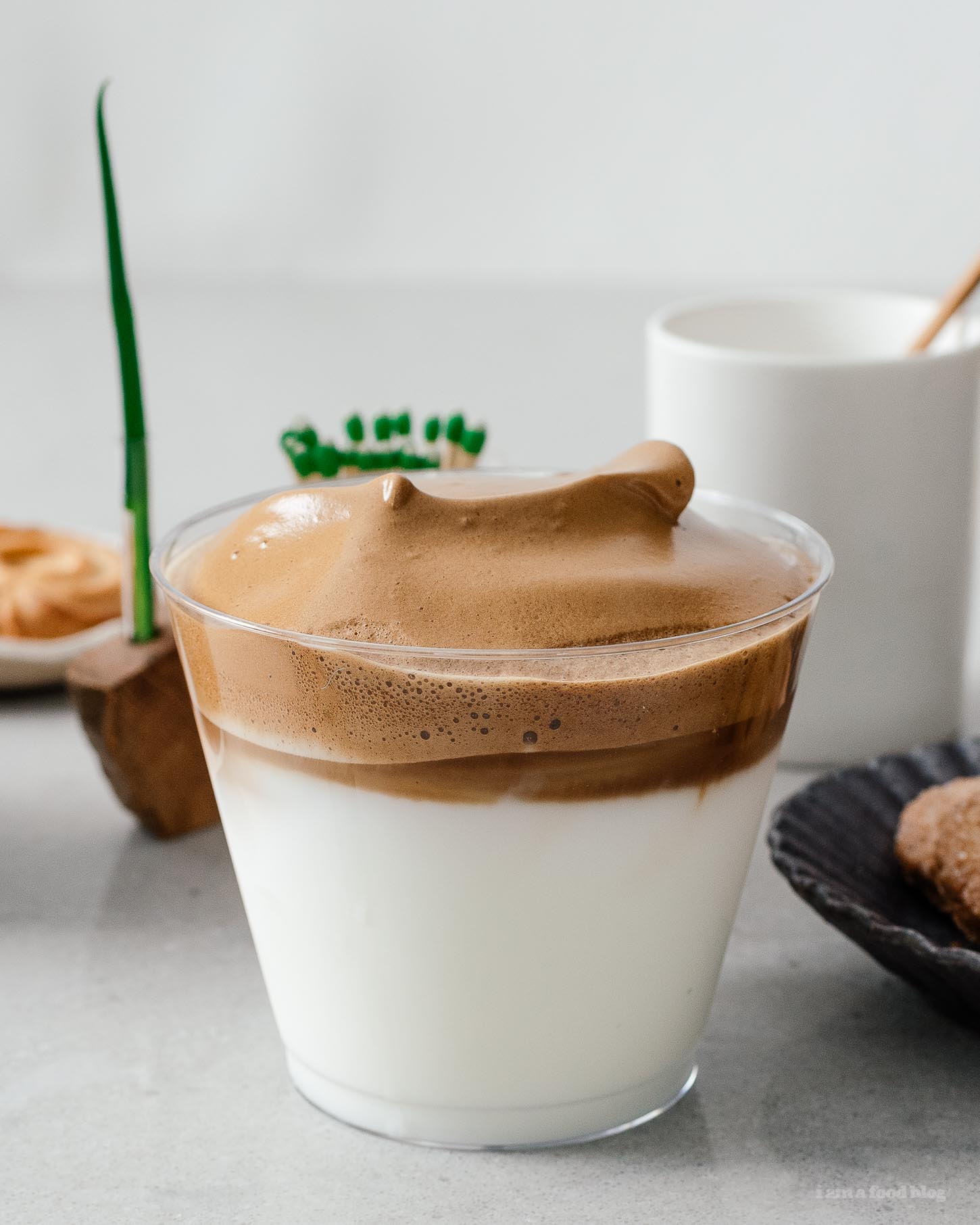 What is dalgona coffee?
Dalgona coffee is a whipped frothy coffee that’s made from instant coffee and sugar, then put on milk. It’s called dalgona because the fluffy creamy coffee looks like dalgona candy, a candy from South Korea that’s just like honeycomb toffee or sponge toffee. You’ve probably eaten honeycomb toffee before, covered in chocolate. I haven’t had it in years but it’s good.

Where did dalgona coffee come from?
The popularity of dalgona coffee mostly stems from South Korea where it started trending because of social distancing/isolation. Everyone was stuck at home and Instagramming their daily lives and dalgona coffee caught on, probably because you don’t need much to make it and it’s really cute. Whipped coffee exists elsewhere in the world too – apparently it came to the Korea consciousness via a big Korean actor discovering it in Macau, but they also have it in India and Pakistan. Apparently it comes from Greece where a Nescafé guy figured out that instant Nescafé whips up nice. They call it frappe!

Do I have to use instant coffee?
Yes, it has to be instant coffee. There’s something about instant coffee crystals that creates the right frothy texture to whip up. You can use decaf too if you’re sensitive to caffeine – I’m pretty sure it’ll froth up the same way but I can’t guarantee it because we don’t have any decaf instant coffee at home. I used Nescafé – apparently Nescafé are the ones who invented frappe coffee so it’ll definitely work the best, but I have a friend who made it successfully with both Maxwell House and Starbucks instant espresso (although the espresso wasn’t as frothy). 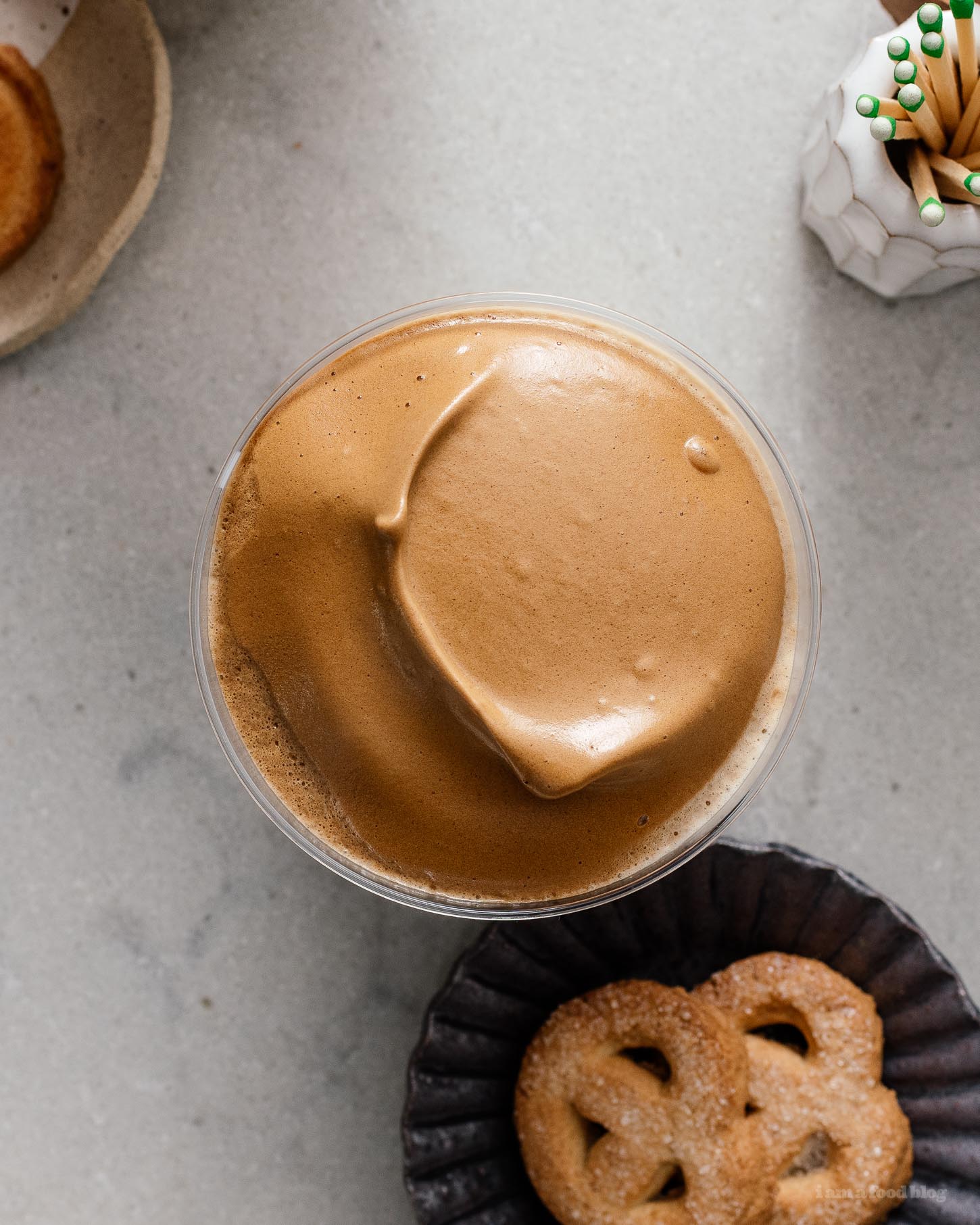 Do I have to use sugar?
Short answer, yes. Long answer, not really? The sugar really helps the instant coffee whip to a fluffy meringue-like texture that holds its shape for a while. But, I’ve also made it using stevia in the raw and that worked too (I assume other granulated sweeteners will as well), but it wasn’t as fluffy. If you’re really sensitive to sugar, you can reduce it down, just know that your fluff won’t be as fluffy.

Do I have to use a hand mixer?
You can use your arm muscles and a whisk, like I did. It didn’t take long at all, but maybe I have a lot of experience whipping cream and meringues. If you have a hand mixer, stand mixer, frother, or whisk you can make dalgona coffee.

Does it have to be iced milk?
You can use hot milk or iced, it’s up to you! I went with iced because it makes the milk go farther and I need to stretch out my milk for as long as possible because I’m literally frightened to go to the grocery store. You can also use evaporated milk (which comes in cans, perfect!), either watered down a bit or not.

What does it taste like?
It’s velvety and creamy and full of sweet coffee flavor. Kind of a like a non-icy frappuccino. It’s full of strong coffee flavors and pretty darn sweet. But if you’re not so concerned about getting that picture perfect fluffy cap, you can ease up on the amount of fluffy coffee you put on top of your milk.

Hope you guys give this a try. I absolutely loved it when I made it with just 1 teaspoon of coffee and 1 teaspoon of sugar. As long as you go with equal parts coffee, sugar, and water, you can make the fluffy coffee of your dreams. In the recipe below I kept it at 2 tablespoons of each and made 2 coffees, but feel free to adjust as needed.

UPDATE!
Why won’t it work?
I’ve been getting lots of comments asking why won’t the coffee fluff up. I have two tips for you guys:
1. Make sure your have enough volume. Having a small amount of anything makes it more difficult to whip because you have to work that much harder to whip the air into a tiny amount of volume. If you’re having difficulty whipping, try doubling the recipe, which will most likely help. Also, don’t use too big of a bowl.
2. Use very hot water which will help dissolve the coffee and sugar instantly. Having the sugar fully dissolved will help the mixture froth up more.

What is the best equipment to whip coffee?

Can I put other stuff in it? Yes, here are some variations:

Can I make it ahead of time?

Dalgona coffee can keep for a long time, especially if you whip it up well. I put a dollop in the fridge to experiment and it’s been there for four days, no joke and it looks exactly the same as the day I made it.

What else can I use it on?

It’s so fluffy you can put it on anything! I made a small batch of brownies recently (recipe coming soon!) and topped one off with dalgona coffee. You can also put it on ice cream or baked goods like cakes, loaves, cookies, basically anything!

Let me know if you have any other questions! May your dalgona be fluffy and thicc!

Stay safe and healthy at home 🙂 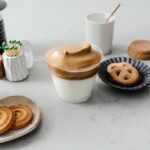 Dalgona coffee, fluffy coffee, frothy coffee, whipped coffee – whatever you want to call it, it’s an easy 3 ingredient recipe for picture perfect coffee when you can’t go out to a cute cafe

339 Replies to “Tips and Tricks for Making Dalgona Coffee ·”